Clubhouse in Numbers: Users, Revenue, Statistics, Worth and Popularity

Clubhouse is an audio-based network that has quickly grown, and now it ranks among the top social media networks. It’s legendary for its level of FOMO.

However, right now this app is invite-only and it is only available for iOS. Clubhouse Users are allowed to listen and participate in different conversations on various topics. Clubhouse is considered a blend of panel discussions, live podcasts, and networking opportunities.

This application was developed as a niche app for Silicon Valley Insiders.

In this article, we will discuss some amazing facts about Clubhouse, its users, revenue, statistics, worth, and popularity. So, let’s get started.

Right now, Clubhouse has a total of 10.1 million users as per the report from Vajresh Balaji. The growing frequency of this app is amazing, it only had 2 million followers in January 2021.

In simple words, within less than three months the user-based of Clubhouse increased by a factor of 5. 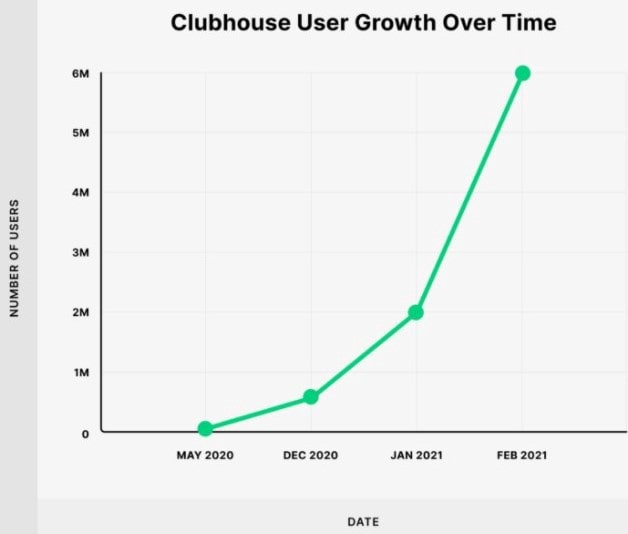 The Popularity of Clubhouse Overtime¶

The user growth of this application is crazy, but there are some other factors such as the popularity of the clubhouse app will leave you surprised.

Right now, it ranks at #5 as the most popular Social Networking app in the App Store, after Facebook, WhatsApp, Discord, and Messenger.

Trending Topics and Themes on Clubhouse¶

There are a lot of topics and themes that are trending on the Clubhouse app. Such as social media, sales, politics, sports, etc. Check out the different data charts related to the clubhouse app. 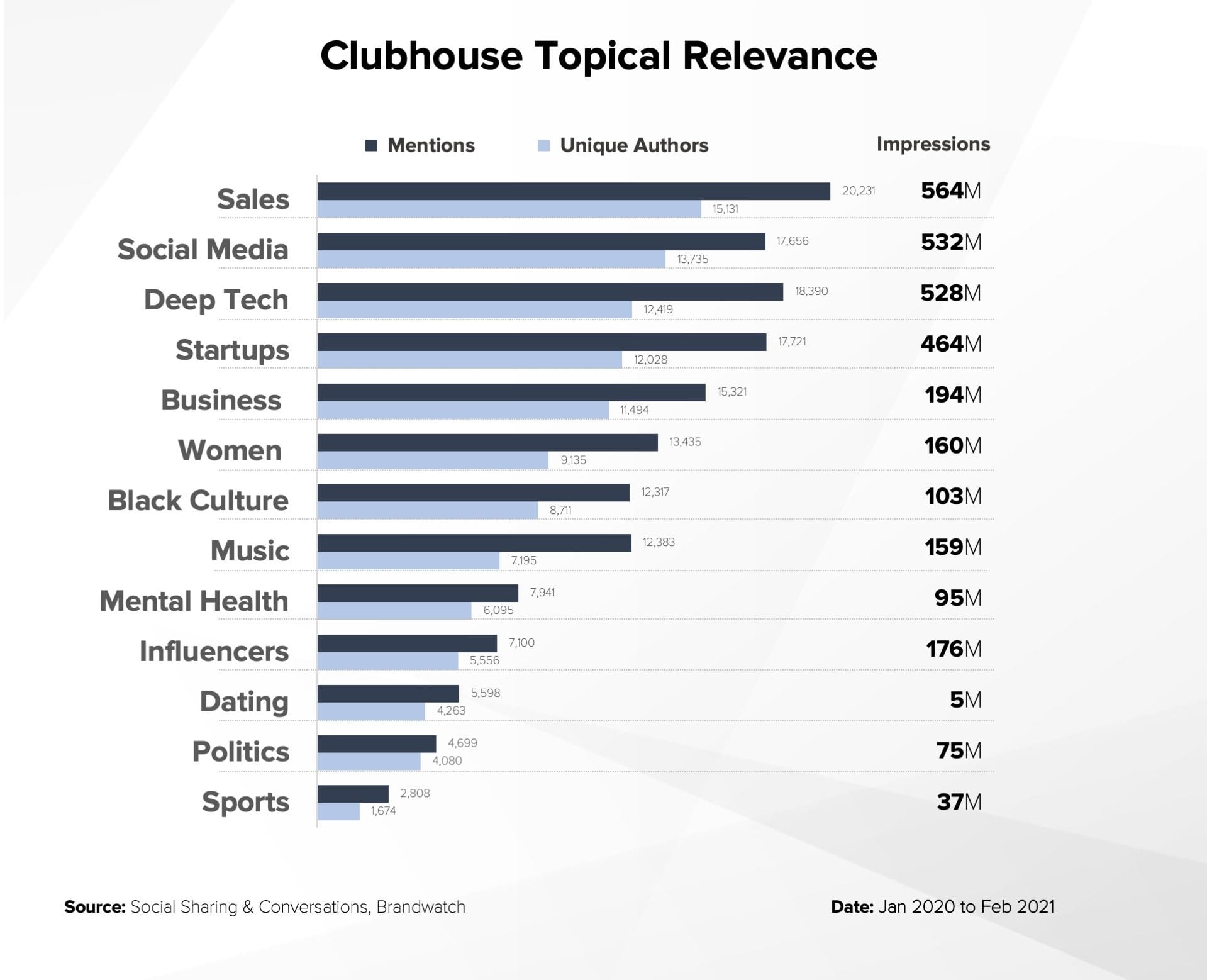 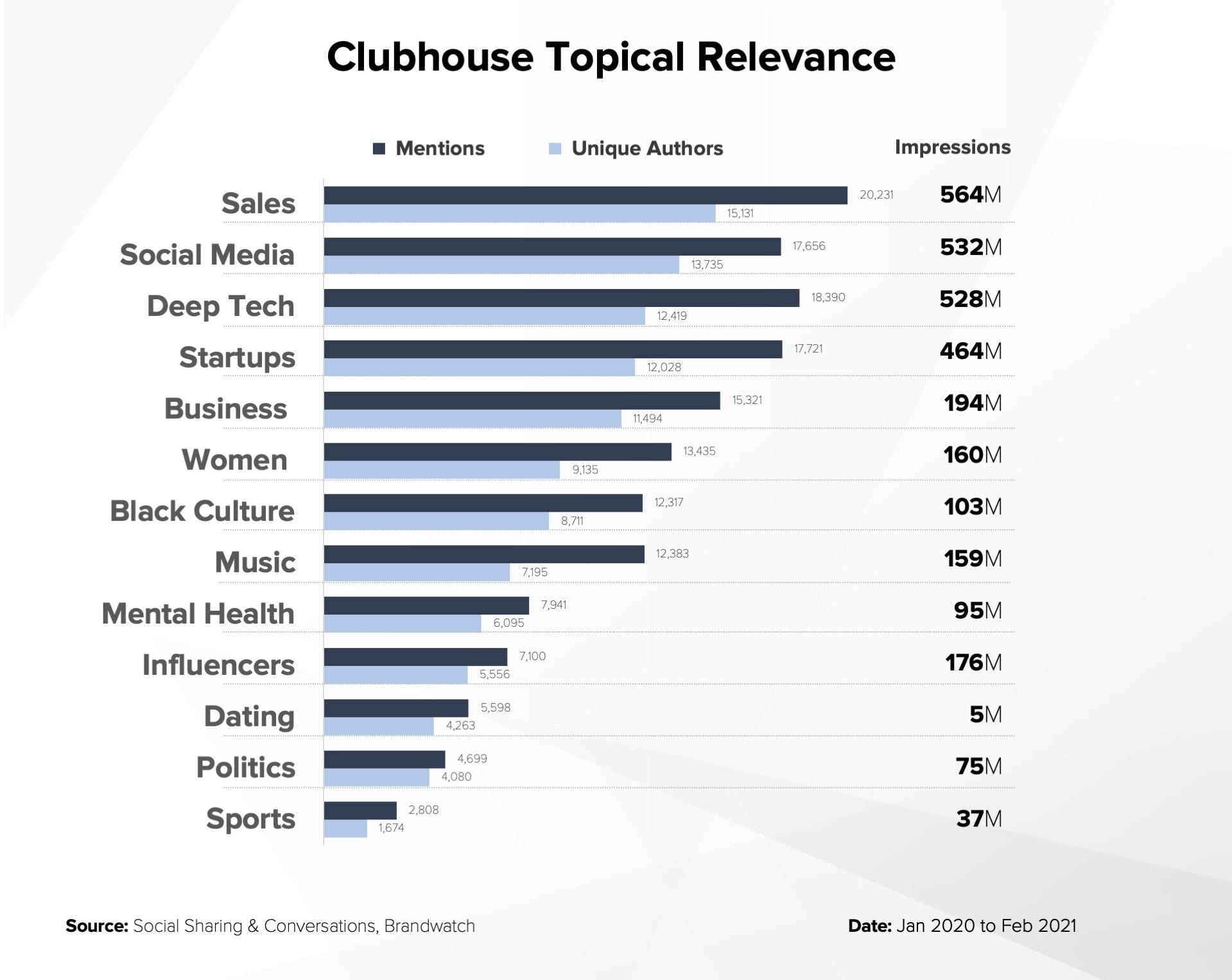 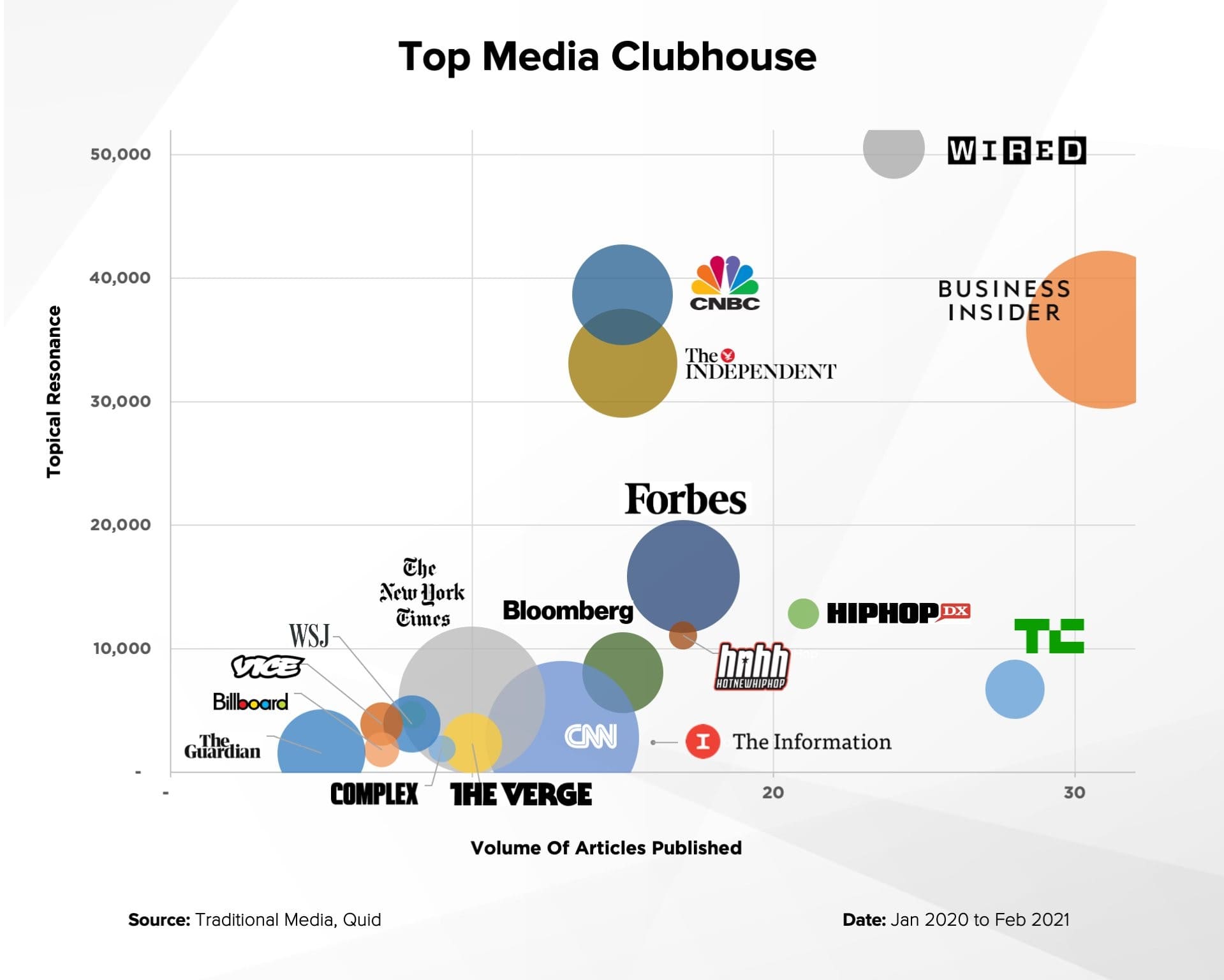 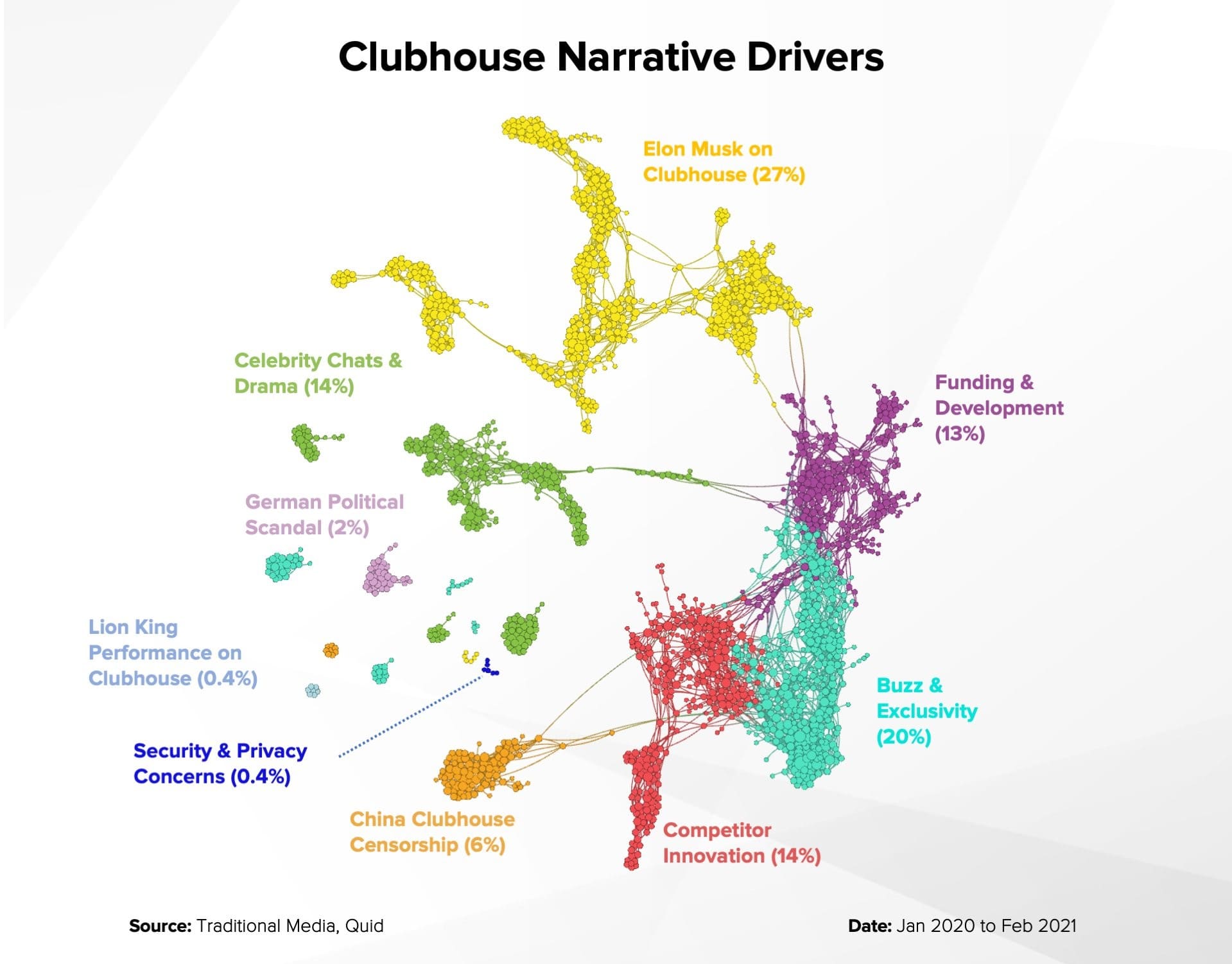 These charts were posted on Twitter by Michael Brito.

As per Google Trends, the searches related to the Clubhouse app increased 99x by the period of January - February 2021 in the past 12 months. 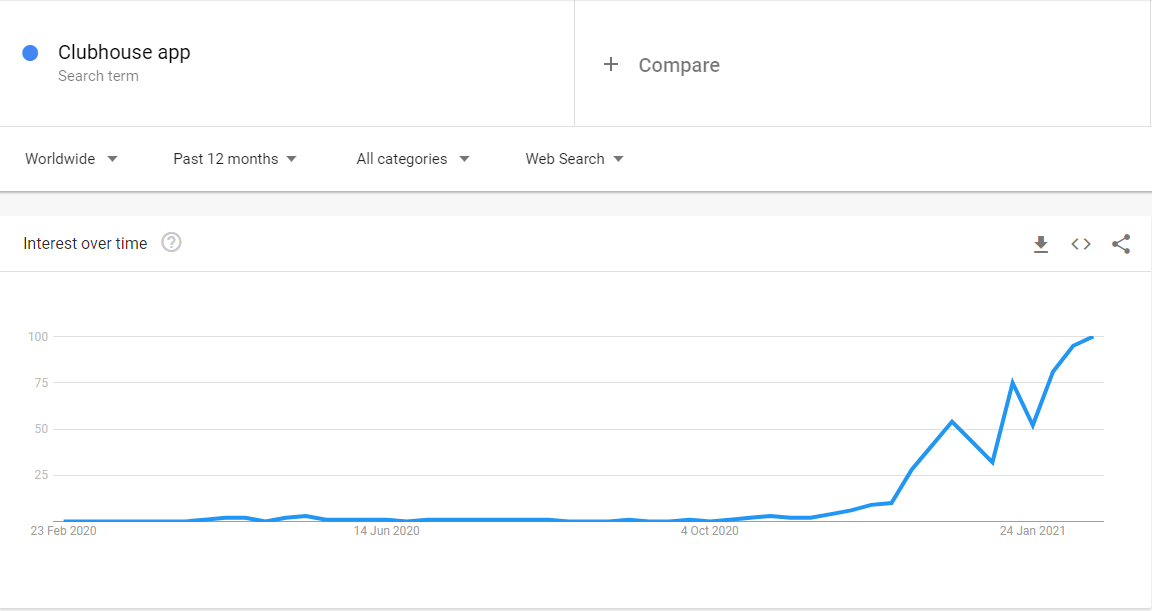 Clubhouse Usage Outside the U.S.¶

The app is available in 154 countries. Initially, it started gaining popularity in the U.S but now it becomes quite popular in countries outside the United States.

It has become the top downloaded application in Germany, Japan, Slovakia, and Turkey.

The application was a massive hit in Japan, securing 440,000 downloads from Japan alone in February 2021.

Besides Japan, it has gained a lot of popularity in China as well. The invite codes for the Clubhouse app are sold for up to $60 in China. It has been downloaded 160,000 times from China’s App Store. By now, the authorities in China opted to block Clubhouse to avoid too much connection to the outside world.

How Does Clubhouse Generate revenue?¶

Right now, the app is pre-revenue. They have not introduced any monetization sources. However, the developers are planning to take out beta tests for monetization this year.

For users, they are planning to create a crowdfunding model that directly pays the creator via display ads (as in Facebook and YouTube).

Is Clubhouse available for Android?¶

No, currently, the application is limited to iOS users but they are planning to roll out the Android version of the app as well. Developers have been hired and a launch is to expect in the coming months.

How to get an invite to the Clubhouse app?¶

The app is invite-only, but you can get in if you ask around to find an invite code.

Is Clubhouse a black app?¶

The clubhouse is a black founded social audio app. Other than that the Black Artist, Bomani X was a key innovator of the voice chatting app, and now his face serves as an icon for the app.

What is the Clubhouse app used for?¶

This app allows its users to host and join audio conversations with other users.

What has Elon Musk to do with Clubhouse?¶

Well, Elon Musk is also a Clubhouse user. Elon Musk hosted an audio chat on Clubhouse with Good Times. Towards the end he interviewed Vlad Tenev regarding the times scandal. Later, the event was uploaded to YouTube and it helped the app to gain more popularity.

Currently, it is an invite-only app but soon the application will be available for everyone.